Why white, male Fireman Sam was shot down in flames 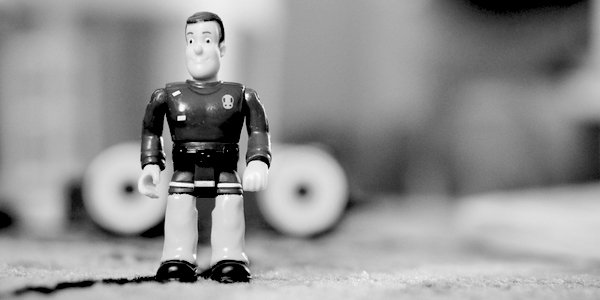 THERE was a time when being a fireman appeared to be a macho adrenaline-fuelled career. Brave chaps hauling heavy equipment around and saving lives by dashing into burning buildings and carrying people out.

However this image glamorised, some might even say immortalised, by films such as Backdraft and Ladder 49 has been increasingly airbrushed from social media, TV and official documents, so now we have a better understanding of what their job entails.

Indeed the London Fire Brigade, to a great fanfare of self-congratulation, reported last year that it had a record 700 female applicants and hoped to appoint 200 of them.

So it was with little surprise, but a healthy dollop of disappointment, that I read that the clean-cut Fireman Sam was being axed as a mascot by the Lincolnshire Fire Brigade (LFB) for being, well, too male and not representative of modern firefighters – we can’t call them firemen and firewomen any more.

Their Chief Fire Officer, Les Britzman, told the Telegraph that Fireman Sam was ‘outdated’ and did not help sell the fire safety message.

He said: ‘Firefighters nationally and residents locally have raised some concerns that Fireman Sam doesn’t reflect the fire service today, in terms of both the job itself and our workforce.’

This is simply not true. Nationally, only 3.1 per cent of firefighters are women. Even in Lincolnshire the number is no more than 5.7 per cent, a figure that that has climbed at the pace of an asthmatic ant since 2002 when it was 1.7 per cent.

Of course it not just the number of women firefighters that has become a concern for the upper echelons of the LFB. The figures for BAME firefighters are even more dire – just 1.4 per cent (2.4 per cent nationally) something highlighted in the most recent HM Inspectorate of Constabulary and Fire and Rescue Service report.

So far from being outdated, the reality is Fireman Sam is very much representative of the Lincolnshire Fire Brigade and other brigades around the country. Given the slow pace of change, it is not unreasonable to predict this is likely to be the case for many years to come.

This raises the question: what was the real reason the LFB decided to ditch this much-loved cartoon character?

The only answer that holds water is political correctness. This view is lent further weight when you read Her Majesty’s Inspectorate of Constabulary and Fire & Rescue Services most recent report and you see that the LFB have been busy addressing ‘the recruitment of staff with protected characteristics’ with special toolkits and the like.

It goes on: ‘The service has also appointed equality, diversity and inclusion champions. These champions will hold regular focus groups which will enable staff to express their views in a safe and open environment. The service also participates in the county council’s diversity steering group which ensures that the service has an effective way of making sure that it complies with their statutory duties.’

The sad truth is that the public sector is still more obsessed with trying to appear ‘more representative of modern Britain’ than actually changing things. In practice, this means airbrushing white men and the elderly from their literature and off their websites.

Call me old-fashioned, but if my house was on fire, or I needed rescuing, I would give not a fig whether the firefighter was male, female, black or white, just that they could do the job.

And as TCW has pointed out, the requisite attributes for a front-line firefighter, including brute strength and physical courage, are much more likely – though not exclusively – to be male characteristics.