Will Barbara Bush’s legacy of literacy go to waste? 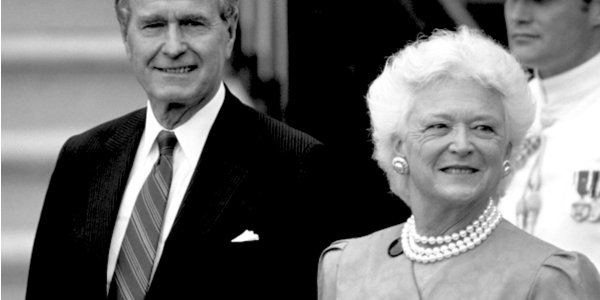 We hear too little these days about ‘good’ Americans. Barbara Bush was such a person and we are all poorer for her passing away at the age of 92. As husband of one president and father of another, her matriarchal status in the US was assured. There was, however, little if any social grandeur about Mrs Bush. Rather, she promoted a truly democratic vision of the American Dream, one that was centred on education:

‘The American Dream is about equal opportunity for everyone who works hard. If we don’t give everyone the ability to simply read and write, then we aren’t giving everyone an equal chance to succeed.’

When her husband became president, it was ‘family literacy’ that she identified as ‘the most important cause we have’. She recognised that illiteracy was locked into the lives of too many working-class families and had become part of a generational cycle that would be broken only when young children and their parents learned together.

The Barbara Bush Foundation for Family Literacy, a charity founded in 1989, was her legacy. It promotes adult literacy in order that parents can read with and to their children. Mums and dads can become family role models for literacy rather than illiteracy.

Many children in the UK, too, are disadvantaged by the illiteracy of their parents. It is very much the ‘elephant in the room’ when standards of literacy are discussed. Few parents are willing to admit to their own illiteracy. They are understandably embarrassed by the consequence of their own inadequate schooling.

At a basic reading level, effective phonics-based teaching in the classroom can mitigate the negative impact of parents who cannot themselves read. For a richer experience, however, most children need parental involvement, encouragement and support. Roald Dahl’s Matilda is a rare phenomenon. Unlike her, not many infants can cope with a parent who announces:

Ironically, it is the educational outlook of Matilda’s parents that now seems to be winning the day as pictures begin to trump words. The sad news of the death of a great campaigner for literacy coincided with the publication of a survey by Google that highlights a new threat to reading and writing. Cartoon language – emoji – is beginning to get a real grip on how we communicate. It is becoming an ‘easy way out’ for literacy’s lazy learners.

According to the Daily Telegraph, 94 per cent of the 16- to 65-year-olds questioned discerned a decline in the correct use of the English language. How far the growing use of emoji is to blame we cannot determine. What is clear, though, is that it reinforces a dangerous addiction to digital technology that is pursued at the expense of traditional forms of reading and writing.

A greater focus on ‘synthetic phonics’ for infants has started to bear fruit in primary school. Basic reading standards appear to be improving amongst younger children. This needs to be built on by broadening pupils’ vocabulary and enhancing their means of expression, but it is not happening.

A survey commissioned by Oxford University Press found that a majority of teachers report an increasing ‘vocabulary deficiency’ amongst pupils of all ages. The ‘deficiency’ is holding children back both academically and socially. It is also contributing to poor behaviour.

The English language comprises more than two hundred thousand words. It allows for sophisticated and nuanced communication. In contrast, there are only around three thousand emoji images. The new language is a constraint on communication and a barrier to it. It is both the attractive easy option and part of a process of ‘de-skilling’ that characterises too much of the educational process these days.

Emoji can be fun but the price children pay for that fun should not be illiteracy. The best teachers in the best schools will understand this and so, too, will sensible and literate parents. What will be the fate, however, of those children who are less fortunate in their schools, in their teachers and in their parents? What hope is there of a Barbara Bush riding to their rescue?