NewsPaperthe art of publishing
HomeNewsWill Bill Gates own the next PM?
283

Will Bill Gates own the next PM? 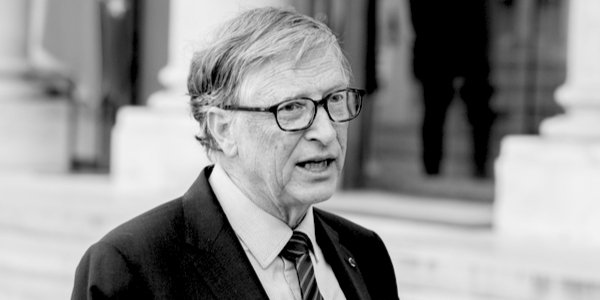 EVERYONE has a view of who should be the next Prime Minister – but does it really matter who is selected (not elected) to put up a show of ‘running the country’?

Some very observant Twitterati noted that Bill Gates’s private jet touched down in London on July 6 at around 9pm, as Boris Johnson’s premiership was hanging by a thread.

I was at the House of Commons that evening for an event held by the Global Warming Policy Foundation (GWPF), a think tank seeking to address the hysteria around climate change and examine the costs to humanity of green policies. The event had to be moved from the Foundation’s Tufton Street HQ due to some vitriolic eco-protesters shouting around the building during the afternoon.

Despite heavy HoC security, more protesters managed to crash the GWPF event in Committee Room 9, including one with purple hair who was unmistakably there to cause trouble, and another activist with his Guardian journalist girlfriend turned up to heckle the speakers and question the Foundation’s legitimacy.

The meeting of the GWPF centred on a report published by its Energy Director John Constable entitled ‘Europe’s Green Experiment: A Costly Failure in Unilateral Climate Policy’, which is available for download here. The report brilliantly summarises the human costs of the EU’s decarbonisation strategies since 1990 and the disastrous failure of ‘thermodynamically incompetent renewable energy’ sources. One of the speakers, a scientist, quipped that EU eco-policies had completely ignored the Second Law of Thermodynamics. After a Google search I understand this law of physics to mean that heat can run only from the hotter to the colder object and cannot be spontaneously renewed without tapping into another energy source. The gist of the GWPF meeting was that finally the EU looked to be moving away from its ‘magical thinking’ and to deal with the impending energy crisis had that very day determined to categorise nuclear and natural gas resources as ‘renewable’. As the chairman of the meeting announced, with that stroke of a pen the Green Age was officially over.

So what follows as we all hunker down with rampant inflation and rocketing cost of living? Will we face further lockdowns this autumn/winter and possibly the introduction of a digital currency (so far dubiously dubbed the ‘Britcoin’)?

Enter stage left Bill Gates, and at a most critical juncture in Westminster. I wonder whether his arrival in the UK was timed specifically to meet members of the imploding Government. Does anyone really think that, whoever is chosen for the position of PM will have any actual say in how this nation is governed? There will be nothing democratic about the leadership selection process. Former Conservative Party members like me, who cut up their cards in frustration at the fascistic lockdowns and vaccine passport mandates, still find themselves without any representation in Parliament, much less in the Civil Service.

(What beggars belief about the slew of ministerial resignations is that not one of them could have pleaded ignorance of  Johnson’s tomfoolery and lack of integrity over the last decade. Surely the scandals, including Partygate and Interior-Decorgate, could not have been unexpected from someone who refuses to admit how many children he has fathered. Why now, in mid-July 2022, do we suddenly witness all the outrage? Could it be that the Tories are desperately grasping for a way to polish their image in time for the next General Election?)

In the end it will be virtually immaterial who becomes the next UK Prime Minister. It may be the case that the two front runners have already been selected by Bill Gates. Current MPs do not reflect the will of their constituents and simply vote as instructed by their globalist elite masters.

And so as the leadership contest heats up and media whips the chattering classes into a fury, let the games begin – looks like we will witness another masterclass in puppetry.