NewsPaperthe art of publishing
HomeNewsWindrush, Labour and the real racists
0

Windrush, Labour and the real racists 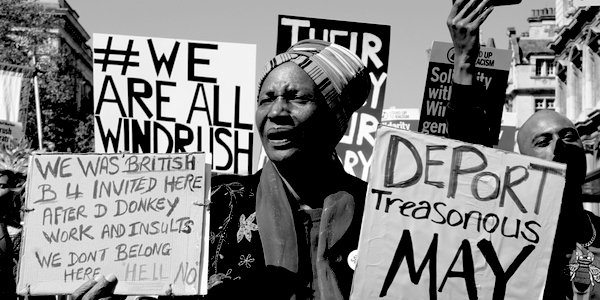 Medicine Hat is a town in the middle of nowhere in Alberta, Canada. Known for having the world’s biggest tepee, its more recent claim to fame is that it is the setting of the hauntingly beautiful book Forgiveness by Mark Sakamoto.

His memoir describes the internment of his maternal Canadian-Japanese grandparents during World War Two. Banished from their happy home in Vancouver to the sparse farmlands of Alberta and deprived of their livelihoods and belongings, the Sakamotos struggled yet endured. Their son married the daughter of Ralph MacLean, a Canadian soldier who almost starved to death in a Japanese prison camp. Both families forgave those who harmed them.

I suggest that Labour MP Dawn Butler reads this book. She might then understand why her statement that the Windrush scandal will ‘never be forgiven nor forgotten, nor should it be’ is hyperbolic and an insult to those who suffered far worse.

At the Labour conference last week Butler claimed that the Windrush debacle proved that the Conservative party is institutionally racist. The attempt to draw equivalence with the Labour party’s institutional anti-Semitism is laughable. Nearly 40 per cent of British Jews could flee the country if Labour is elected. In stark contrast an estimated 63 people affected by the Windrush scandal want to return to the UK, including the half who are hardened criminals.

Despite her admonition not to forget anything about Windrush, Butler neglected to mention one important point – that Labour was in charge when half of the 164 Windrush removals took place.

But what else can we expect from this inept politician who wants a Secretary of State to be appointed for Labour’s Women’s and Equality Department – a title which would not look out of place in North Korea – and complains that some jerk chicken recipes are racist?

Butler’s claim that Theresa May was responsible for the Windrush scandal ‘by design’ is not only slanderous but also grossly unfair. Amber Rudd resigned from her role as Home Secretary after this debacle. We have yet to see any Labour MP resign for Labour’s anti-Semitism. Both May and Sajid Javid profusely apologised for this administrative mistake and took steps to remedy the wrong.

The Tories have many faults but racist they are not. That ‘accolade’ belongs to Labour. Despite Andrew Marr’s disgraceful hectoring of May on Sunday the PM was right to refuse to apologise yet again for the Windrush scandal. If there had been thousands of removals for no other reason other than they were part of Windrush, that would have been a racist policy. But this did not occur and neither was this dreadful mistake malicious.

MPs should not make outlandish accusations without evidence otherwise they risk looking like fools, something that Butler is very adept at. Her sanctimonious twaddle is indicative of a greater problem within Labour – their obsessive propensity to fetishise groups of people, including those harmful to our country. This, combined with their childish virtue-signalling, shows they are nothing now but an anti-Western and anti-Semitic protest party, and truly unfit for governing.

Labour’s ongoing attempts to disparage the Tories as racist are quite ludicrous. Their own conference – with its rows of Labour MPs and union bosses waving Palestinian flags and chanting for the destruction of Israel (a death warrant for Jews) – was the epitome of racism. This ghastly display of anti-Semitism encapsulated what can only be described as a fetishism complex – be it with Islamists, Windrush or the victims of the Grenfell fire, it is beyond any rationality.

Seizing on any disaster as a political grenade to lob at the Tories, Labour won’t stop until they have dissenters on their knees begging for forgiveness. With her obsessive focus on racism, Butler has elevated herself to bully-in-chief of this cause. For the good of the country she, and the rest of her party, must be ignored.