Wokery and the lessons of 1789 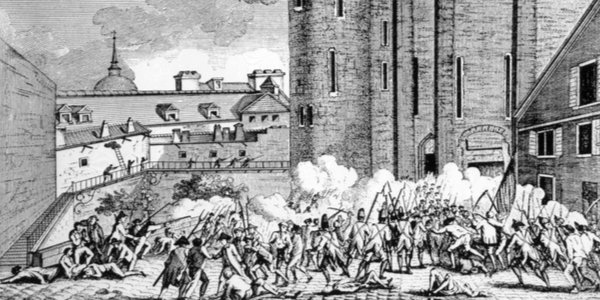 THE disturbance arising from That Interview is only a tiny part – an emblem or a snapshot – of what is going on. The woke are the new revolutionaries and their aim, in their own phrase, is a ‘Great Reset’.

If we wish to understand this, we must look for a historical example of a similar upheaval, and fortunately there is one to hand. The French Revolution of 1789 was a time very like our own. Those calling themselves ‘enlightened’ and ‘progressive’ were avid for change – not a little tinkering at the edges but the abolition of the old order and its replacement by something new: depending whose side you are on, a new civilisation or a new barbarism.

The Revolution in France began under the tutelage of incompetent political philosophers such as Rousseau and Locke and flashy self-publicists including Voltaire. Its slogans were Liberté, égalité, fraternité and the fictitious notion of natural rights. Fictitious because ‘a right’ necessarily involves someone else in a responsibility: so one man’s freedom becomes another’s yoke.

Everything – literally everything – was to be swept away: not only the Catholic Church, but Christianity in all its forms. God was pensioned off. The old measurements were discarded and replaced by the artificiality of the metric system in which, preposterously, idiotically, a metre was defined as one ten-millionth of the distance between the Equator and the North Pole. Feet and inches measure man better than a metre can. But the human scale was not good enough for the illuminati who decreed that people must live by abstractions. Even the names of the months were changed.

Needless to say, those 18th century Romantics and wishful thinkers all over Europe loved it. Silly Willie Wordsworth wandered lonely as a clot by the side of Derwent Water singing, ‘Bliss was it in that dawn to be alive, and to be young was very heaven!’ Wandering Willie soon changed his mind once the Reign of Terror got going in 1793. In effect this state-sponsored terrorism, perpetrated on its own people, said: ‘Accept our new dogmas about equality and brotherly love, or we’ll kill you!’ They did, too. It wasn’t just a few noble heads which rolled in Paris: Madame Guillotine went on the Tour de France and altogether 40,000 people were summarily executed. (These are accurate figures, for one thing that bureaucrats of all times and places can do superbly is keep records.) Then the Revolution provided a bonus by enabling the rise of the tyrant Napoleon. Europe was convulsed by the results of all this sweetness and light, and the jumped-up Corsican’s hash was not settled until the Duke of Wellington came calling in 1815.

‘Woke’ is only a useful bit of slang and the ‘Great Reset’ a metaphor acquired through too much peering into our electronic gadgets. It would be more accurate to describe our present state as ideological hegemony – a set of secular dogmas which circumscribe every aspect of our lives. Let me give just a few examples . . .

Our libraries and national institutions are removing the statues of those they newly disapprove and – if not quite, or not yet – burning our history books, they are rewriting them. There is a slavish obedience to the perverted opinions about race relations preached by the looters and arsonists in the Black Lives Matter (BLM) movement. Justin Welby, the fatuous Archbishop of Canterbury, has publicly ‘taken the knee’ to show his solidarity with these thugs – as have footballers, cricketers and those employed in what are laughably called ‘the arts’ – but which are mainly showbiz and pop music, personality cults and other trivia mediated by an endless proliferation of ever-slicker electronic gadgets.

Our revolution is nothing if not pervasive. Christian teachers who refuse to teach the perverted LGBT+ agenda lose their jobs. J K Rowling’s once avid fans have ditched her and her Harry Potter books because that sane woman has said she doesn’t believe men can have babies. Our homegrown totalitarianism – though it infects the whole of the western world – has its slogans and shibboleths such as Equality and Diversity. And, like all religions, it has its all-enclosing mythology: in this case the pagan superstition of global warming. The previous and equally fatuous Archbishop Rowan Williams notoriously marched through central London – in his anti-Covid mask – to express his allegiance to the hooligans in Extinction Rebellion who hold up the traffic, deface public buildings and prevent the publication of newspapers – thus denying to others the freedom of speech which they themselves so conspicuously enjoy.

I was lying awake in the night thinking about how the chess match – the realm – is not lost until the King has been rendered impotent. (In our case the Queen, of course). The enemy has captured all the other pieces (institutions) and remade them in its own image: the rooks/castles (armed forces); the knights (the landed gentry); the Church of England, symbolised and represented by the bishops, has committed suicide; the pawns (the plebs) drugged out of their minds with junk TV and antisocial meeja. They will not be happy until they have destroyed the monarchy.

And, under the cover of wokery, this is the revolutionary task in which the Queen’s enemies – that is our enemies – are far advanced, while the keepers of the Queen’s peace look on and cheer the mob.