NewsPaperthe art of publishing
HomeNewsYellow peril for the green president
33

Yellow peril for the green president 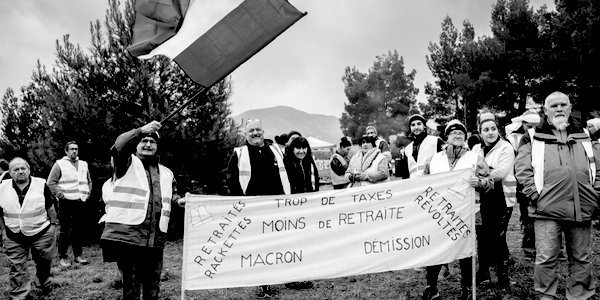 In France the people are rebelling against President Emmanuel Macron’s environmental policies, the latest of which is his determination to keep increasing the tax on fuel.

Hundreds of thousands have turned out to block motorways, slip roads and fuel depots. The so-called gilets jaunes (yellow vests) have held at least 630 protests nationwide. Further demonstrations are planned this weekend with calls for protesters to ‘block’ Paris on Saturday, ‘on foot, on horseback, or by car’. The gilets jaunes have described themselves as a ‘grassroots movement’, which is grown and spread by social media. As a result, there is no recognisable hierarchy for authorities to communicate with.

Several police unions have expressed sympathy, and promised not to punish petty or ‘middle-size’ offences ‘out of solidarity with the citizens’.

The cause of the price hikes are ‘eco taxes’ intended to dissuade the French from using cars. The fuel taxes penalise the poor disproportionately and many view green policies as an attack on working people. The tax on mains gas is rising even faster than that on fuel and Macron plans to ban oil-fired central heating within ten years. He has banned the extraction of any fossil fuels on mainland France, which is ironic since France is sitting on 80 per cent of Europe’s frackable gas, enough to keep France self-sufficient in energy for centuries.

The rise of the gilets jaunes coincides with Macron’s record low 26 per cent approval rating. A poll published by Ifop on November 14 indicates two-thirds of French people expect a ‘social explosion’ in coming months. Could this be the start of a new French Revolution?