WELL, the eco warriors caused some disruption at the weekend as the global climate strike kicked off. Lots of people waving placards and shouting slogans, with some gluing themselves to roads and buildings. All very media attractive, but it does not help solve the problem.

At the same time an offshore wind farm contracted to provide electricity at £40 per MWh. That is the cheapest electricity generation in the UK, and it is CO2 free. This country’s engineers, politicians and government officials have managed to deliver cheap, non-polluting electricity from a technology that only really emerged (onshore) in the 1990s and with heavy subsidies. Getting to this stage has taken serious investment and engineering, but it has been done. Advances in energy storage will mean that we can harvest wind energy more efficiently.

But before you break out the champers and order a Tesla, take a look at the chart below. This derives from government data and shows the UK’s 2018 energy consumption by fuel. (The figures are in terawatt hours). 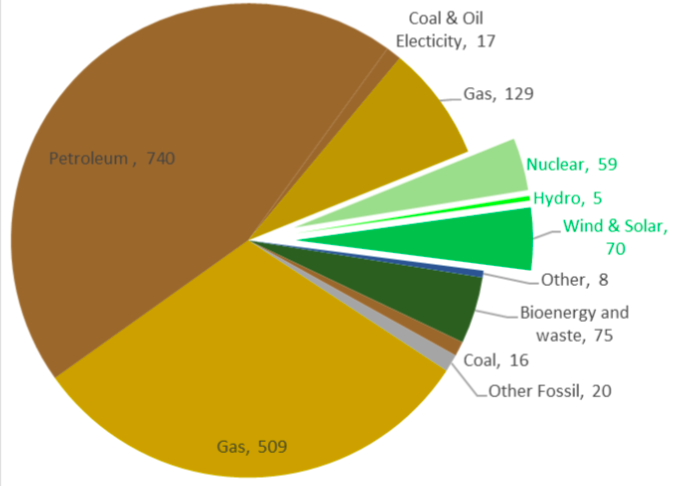 Just 8 per cent of our energy comes from zero carbon sources. We have a very, very significant challenge and there are just four technologies available, namely wind, solar, nuclear fission and nuclear fusion (which is not yet deliverable at scale – and won’t be until 2040 or so). So if we want to go to zero carbon we need 12 times as much of our energy to come from nuclear, solar and wind. And we need a national grid system capable of distributing 12 times the amount of power that it does today. Be in no doubt, these are major engineering challenges.

Even if we manage this, which given this country’s engineering ability is not impossible, there remain three other problems. Firstly much of the stuff that we consume in the UK is imported from countries that have far less green energy (unsurprising given the restrictions on atomic power).

Secondly the UK’s unilateral transition to a ‘zero CO2’ country will have little effect on the rest of the planet, as the UK emits only 1 per cent of the world’s total. To change the planet everyone else will have to get on board too, which may be a significant business opportunity for the UK.

Finally, reducing emissions to zero only stops the problem getting worse; it does not remove CO2 from the atmosphere.

There is a heck of a lot more to do which requires scientists and engineers. You don’t produce engineers by closing classrooms or bunking off to a demonstration.

Share
Facebook
Twitter
WhatsApp
Email
Previous articleCrass or deliberate? Sinn Fein MP in Labour meeting at the Brighton bomb hotel
Next articleTime for our judges to face the ballot box